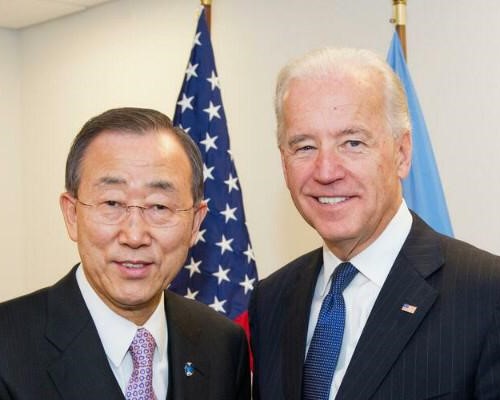 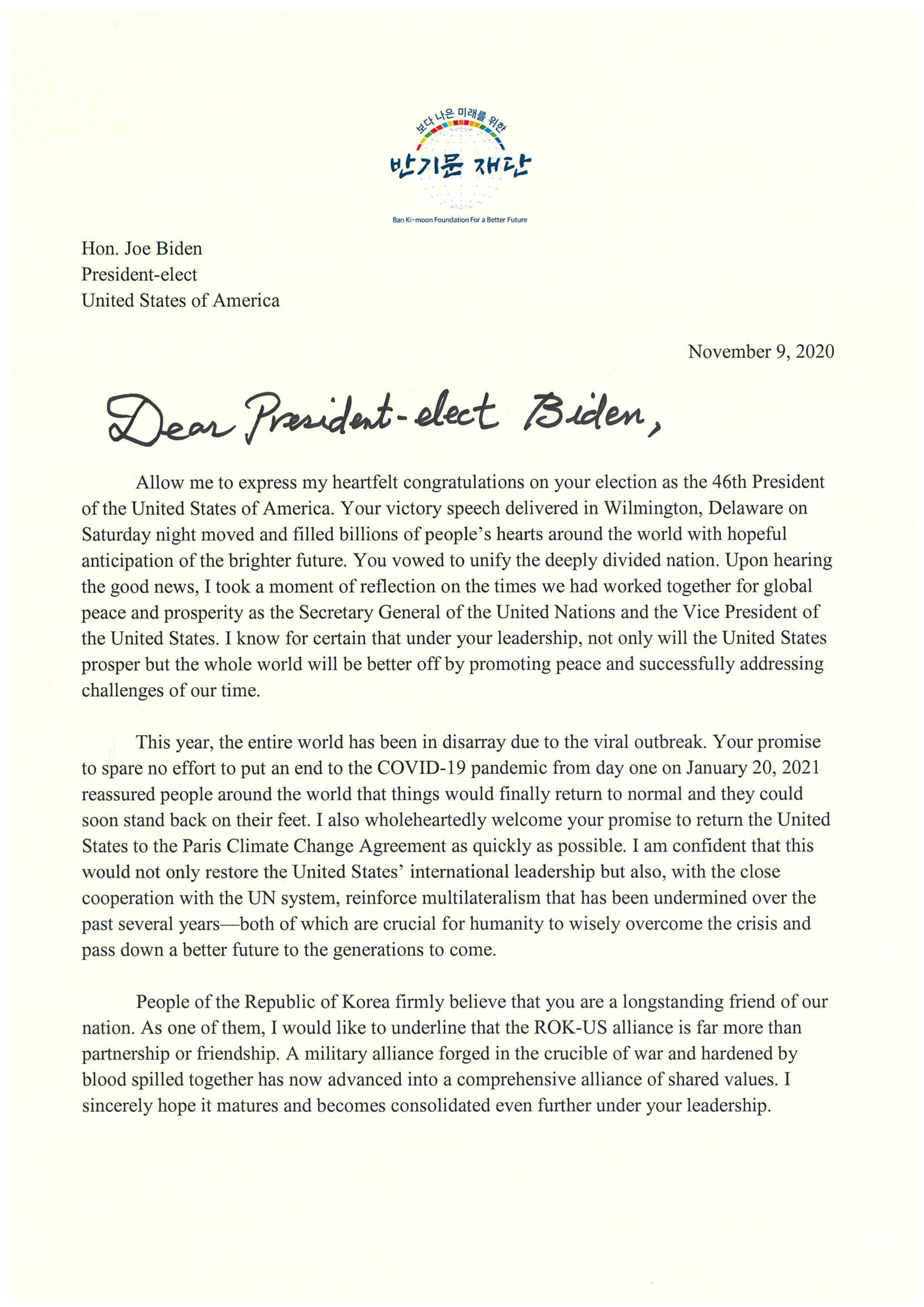 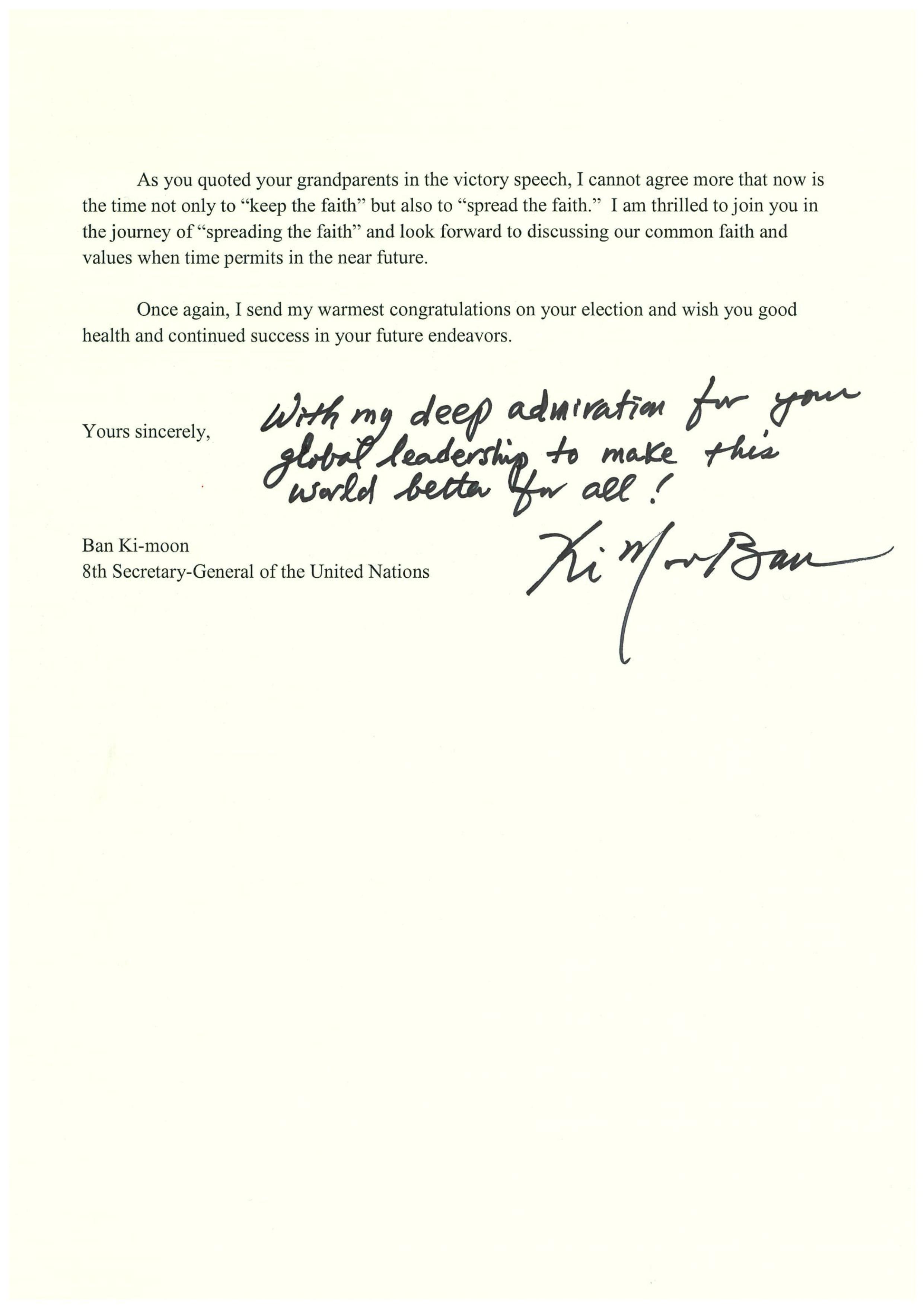 Allow me to express my heartfelt congratulations on your election as the 46th President of the United States of America. Your victory speech delivered in Wilmington, Delaware on Saturday night moved and filled billions of people’s hearts around the world with hopeful anticipation of the brighter future. You vowed to unify the deeply divided nation. Upon hearing the good news, I took a moment of reflection on the times we had worked together for global peace and prosperity as the Secretary General of the United Nations and the Vice President of the United States. I know for certain that under your leadership, not only will the United States prosper but the whole world will be better off by promoting peace and successfully addressing challenges of our time.

This year, the entire world has been in disarray due to the viral outbreak. Your promise to spare no effort to put an end to the COVID-19 pandemic from day one on January 20, 2021 reassured people around the world that things would finally return to normal and they could soon stand back on their feet. I also wholeheartedly welcome your promise to return the United States to the Paris Climate Change Agreement as quickly as possible. I am confident that this would not only restore the United States’ international leadership but also, with the close cooperation with the UN system, reinforce multilateralism that has been undermined over the past several years—both of which are crucial for humanity to wisely overcome the crisis and pass down a better future to the generations to come.

People of the Republic of Korea firmly believe that you are a longstanding friend of our nation. As one of them, I would like to underline that the ROK-US alliance is far more than partnership or friendship. A military alliance forged in the crucible of war and hardened by blood spilled together has now advanced into a comprehensive alliance of shared values. I sincerely hope it matures and becomes consolidated even further under your leadership.

As you quoted your grandparents in the victory speech, I cannot agree more that now is the time not only to “keep the faith” but also to “spread the faith.”  I am thrilled to join you in the journey of “spreading the faith” and look forward to discussing our common faith and values when time permits in the near future.

Once again, I send my warmest congratulations on your election and wish you good health and continued success in your future endeavors.

8th Secretary-General of the United Nations